(free call except from mobiles or public phones) or

For a poison emergency in Australia call

The Drug and Alcohol Help Line is available 24-hours, 7 days a week on

Emergency help
during flood or storms

Glebe Park covers 4 hectares on the eastern side of Canberra’s city centre. It features a stage, a 19th century-style rotunda, sculptures, barbecues, playgrounds, and a large grassy area.

This tranquil green space in the city reflects the character of a traditional English park. In summer, the English elms and oaks provide shade, and in autumn they turn gold.

The park’s borders that front roads are marked by a stone fence with steel railings, with access through formal gateways. The park is criss-crossed with paved paths. Each of the 10 gates is officially named to reflect the historic background of the area since European settlement. Names include St John's, Galliad Smith, Campbell and Canberry.

It is a popular park for weddings, public meetings, festivals and events (a permit may be required). 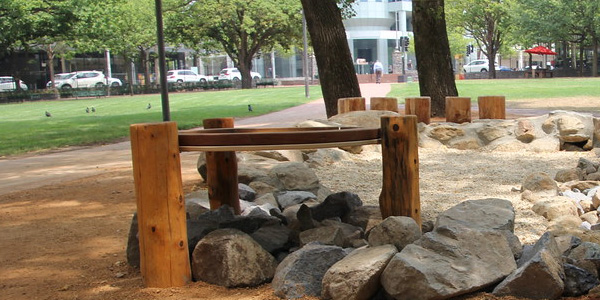 At Glebe Park, you can see:

Glebe Park is located on Ngunnawal Country, an ancient and diverse landscape managed by Ngunnawal people for tens of thousands of years.

For time immemorial Ngunnawal people have maintained a tangible and intangible cultural, social, environmental, spiritual, and economic connection to these lands and waters.

The park is part of a 40-hectare glebe which, together with a small nearby area, was transferred by merchant and pastoralist Robert Campbell to the Church of England in the early 1840s when the area was known as Canberry. St Johns Church was built on the smaller site, which is still serving its parish community. The glebe was used as a farm.

A century later, a community campaign was launched to create a public park and save the historic trees planted on site.

It is listed with the National Trust (ACT) and Australian Heritage Commission.

Before you go/How to get there

How to get there

Limited time-controlled parking is available outside the park only. It is accessible from Coranderrk Street, Ballumbir Street, Akuna Street and Bunda Street.

Boundary mapping is indicative only.